This book proves to be a journey of adventure to readers committed to and interested in the science of nature. The new field of potential vortices is introduced by demonstrative examples from the area of vortex physics. By the example of dielectric losses of capacitors, the vortex decay is verified, motivating the subsequent extension of Maxwell's Equations. In detail, the extension of Faraday's law of induction leads to the potential vortices and ultimately to the fundamental field equation, which fulfills all requirements demanded by such a world equation.  All derivations, which are not based on postulates, are of mathematical validity. The derivation of the Schrödinger equation from the "world equation" shows that the newly formulated field equations of electromagnetism are able to fulfill the postulates of quantum mechanics. Potential vortices, therefore, have an effect also at microcosmic scale and in nuclear physics and not only in the case of microwaves, high-frequency welding, or in the biosphere of our planet.

The ambitious aim of a holistic unified theory is achieved by a consequent utilization of the principle of causality. In doing so, the first step is to remove the electron from Maxwell's theory, to be finally derived as a calculable structure of a potential vortex.  The field-theoretical approach replaces the former electric source field free of vortices, by a vortex field free of quanta, that is, by the field of the potential vortices. This proves to be the result of a strict mathematical derivation, which does without the need for postulates or neglects. The approach consists of two equations of transformation (given on the envelope).  As a consequence, well-known paradoxes of the theory of relativity are solved, if a measure of length dependent on the field constitutes the base of the theory of objectivity, if thus gravitation, temperature and all known interactions, explained by a single physical phenomenon, back up the holistic theory of everything.

Potential vortices are a phenomenon of the field that is able to form structures. The most simple spacial structure is the sphere, which is, as we are dealing with an electromagnetic vortex, electrically charged.  In this manner, the electron is derived as the elementary quantum as well as all particles composed of it. For the first time, quantum properties, such as mass, charge, spin and magnetic moment, of the most important elementary particles are calculated.  The base for the calculation of the measurement values listed in the standard model is a theory of objectivity formulated by the author, after the theory of relativity has not been able to accomplish this.  The quantitative proof for the existence of potential vortices is given by the high correlation between the calculated quantum properties and the known measurement values.

Coulomb's law stating that the electric field decreases proportionally to the square of the distance (E ~ 1/r²) is equal in meaning to a length contraction dependent on the field. Based on this, the mass defect of an atomic nucleus is determined mathematically accurately. Furthermore, the model of potential vortices yields accurate values for the diameters and shapes of nuclei, which are always compared to the known quantum properties. The riddle of the halo nuclei is solved on the way. The strong interaction is simply a magnetic attraction of the nucleons. The atomic shell kept together by the electric field forces is calculated afterwards. Even this is based upon the dependency of the radius values on the field. An equation is derived with which the atomic radii of all known elements and partially even their ions may be calculated. The correlation to known measurement values was successful, across the domain from Helium to farther than plutonium, with a precision never seen before, which gives reason for the validity of the model. Thoughts on monatomic structure as a prerequisite for the application of cold fusion and nanotechnology constitute the end of the book.

If you want to know how to get infected with the Corona virus and how it works in purely technical terms, you have a long way to go. First of all, the reader needs a new understanding of gravity. The Croatian scholar Boscovich indicates the path we are taking. He culminates in the state-ment that all matter in dimensions, whether large or small, depends on the fields of the environment.
This is the first time that the structure of gas can be specified. In the case of solid matter, it is like a halo, which becomes larger the further away it is from the nucleus. This would lay the foundations for the central question.
Now we can take care of the human people, the gas we need to breathe and the DNA that controls everything. The path from the lungs, through the mitochondria, where the rotation is transferred to ATP, to our internal consumers is recorded. Biochemistry is only marginally involved. The actual work is done by wireless. It also explains how the human body is controlled, provided that we know the control signals ... 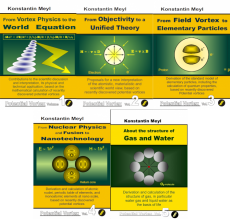